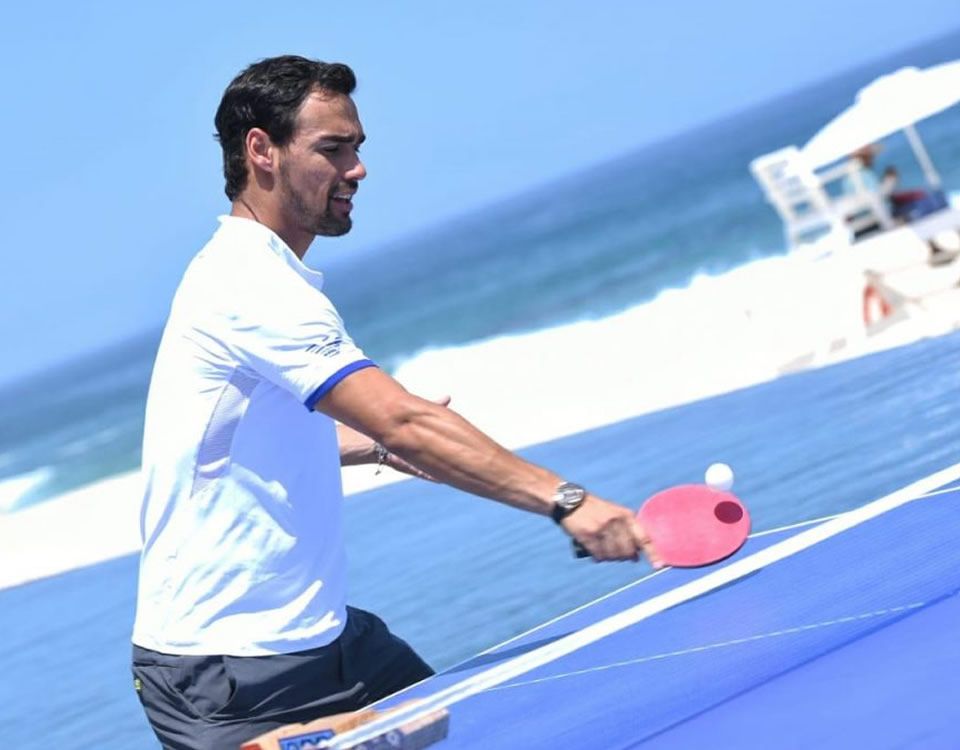 Los Cabos, BCS, July 31, 2019.- On June 10, during the weekly ranking updates by the ATP, the Italian Fabio Fognini became the oldest player to enter the Top 10 since the Australian Ken Rosewall did at 38-years-old and the Australian Rod Laver at 35-years-old.

Fognini, is now just the third Italian in the history of the country along with Adriano Panatta and Corrado Barazzutti, to be ranked in the top 10 in the world. It must be added that on April 21st, he won his first Masters 1000 title in Monte Carlo after beating Rafael Nadal in the final. Without a doubt, the Italian is one of the favorites to win the Abierto Los Cabos. At 32-years-old, Fognini acknowledges that he has achieved greatness in his career, but he still aspires for more.

“I’m fine, at my best, but I cannot say what will happen here, I want to start this American tour the best I can. The achievements are there, but they are only numbers, as I am No. 9, it is a statistic. Now that I have managed ti be top ten, I now have different objectives that I will try to fulfill. I have achieved the dream that I had since I was young.”

In the current state of world rankings, there are four players in the top ten who are over 30-years-old, Roger Federer, Rafael Nadal, Novak Djokovic, and Fabio Fognini; this group has dominated for years, preventing the new generation of players to enter.

“There is a very good new generation, but in the end, the big tournaments are won by the same group of three players for a long time. The next gen has yet to make a quality leap. The average age of the top ten exceeds 30-years-old, so the length of a tennis career is longer now, which is also good. In addition, the trains help us a lot, being more concerned about preventing injuries and playing the least amount of tournaments possible – which means when you play, you have to play well.”

The San Remo native, winner of nine ATP titles, all on clay except for the 2018 Los Cabos, opened up about the three greats of tennis and would aspects he would like to have of theirs.

“From Roger, I would choose to have everything, from Rafa, how he fights, how he suffers even when he is not 100%, from Djokovic, also everything, he is a very complete player, especially his backhand. They are three great players, all different, with different techniques, that play totally differently. I personally would like to see Federer play more because it is pure class.”

The Italian, who is married to Flavia Penetta, two time champion of the Abierto Mexicano de Acapulco, comes from a long and exhausting tour of Europe. Which in addition to Monte Carlo, included stops in Madrid, Rome, Paris, Wimbledon, Croatia, and Hamburg. Because of this, he proclaimed what he does between continents to stay in shape.

“When I have the opportunity to relax on long trips, I sleep, anytime I can do it, I do. I also like to read but I prefer to sleep when taking a trip as long as I have and continue to do. The most important think for me is to sleep and recover the best I can. I like all different genres of music, but video games do not appeal to me,” said Fognini who on Wednesday, will start his title defense against the Spaniard Marcel Granollers.

“For now, I am only focused on the first match. It will be tough, I will have to run a lot; then I will have another opportunity to sit here and talk about the quarter-finals, so I have to go one step at a time,” said the Italian.

He also elaborated on his love for football, he is a big fan of Inter Milan. “I love football, definitely. If I had to choose another profession other than tennis, I would certainly have liked to be a football player.”

Fognini confirmed that he will be playing on the European Laver Cup team in September with Roger Federer, Rafael Nadal, Dominic Thiem, and Alexander Zverev.

The accreditation of national and international media must be carried out through the website
starting July 5ht until the 26th 2022. Under no circumstances media applications will be received
after the mentioned date, no exceptions allowed.

All aplications for national and international media must meet the following requirements by Mextenis:

Once you have pre-registered online, you will receive an email confirmation with the information (address, schedules & days) and any other information to collect your accreditation. You must present an official identification (ID) (Passport, Driver´s licence, other) to pick up.

Any websites associated with any other print media, television or radio that had previously requested an accreditation, may be approved as long as they meet the necessary requirements.

A maximum of one (1) web journalist without a photographer may be accredited. The website (imagenshop.com) will be avialable, where you may have access to download any graphic and audiovisual content, during and after the event. This material can be downloaded for free and will be available for all.

The applicant must present the last 2 years of audited traffic data (identified as unique IP addresses per year).

Only one (1) reporter will be credited.

All television networks that wish to be credited must follow these rules:

Only (1) reporter and (1) photographer will be credited.

Only (1)reporter and (1) photographer will be credited.

Once your registration is successfully completed, you will receive a confirmation email statting that all the aplication and data was correctly collected and is on the approval process.

Each application is managed personally, so there is no estimated time for the response to each of them.

If your application is approved, you will receive an email with a PRE-REGISTRATION CODE (this code is personal and non-transferable), it has a particular access and must match with the name of the application.

This code must be entered into the link that you will receive with your confirmation email to be able to finish the registration process and thus receive your letter of approved accreditation, indicating the date, place and schedule in which you will have to collect your accreditation.

Accreditations will not be delivered outside the indicated date. You must be on time. A strict control is taking place.

The Press Room will be operating from Saturday, July 30th from 11:00 a.m. until August 6th, (90
minutes after the closure of the event).

Inside the press room, the jackets /vests for photographers and Cameramen or crew will be given away.

There will be a website available (www.abiertoloscabos.com) for both credited media as non-credited to be able to download content, graphic and audiovisual material before, during and after the event. All available material will be free for all media.