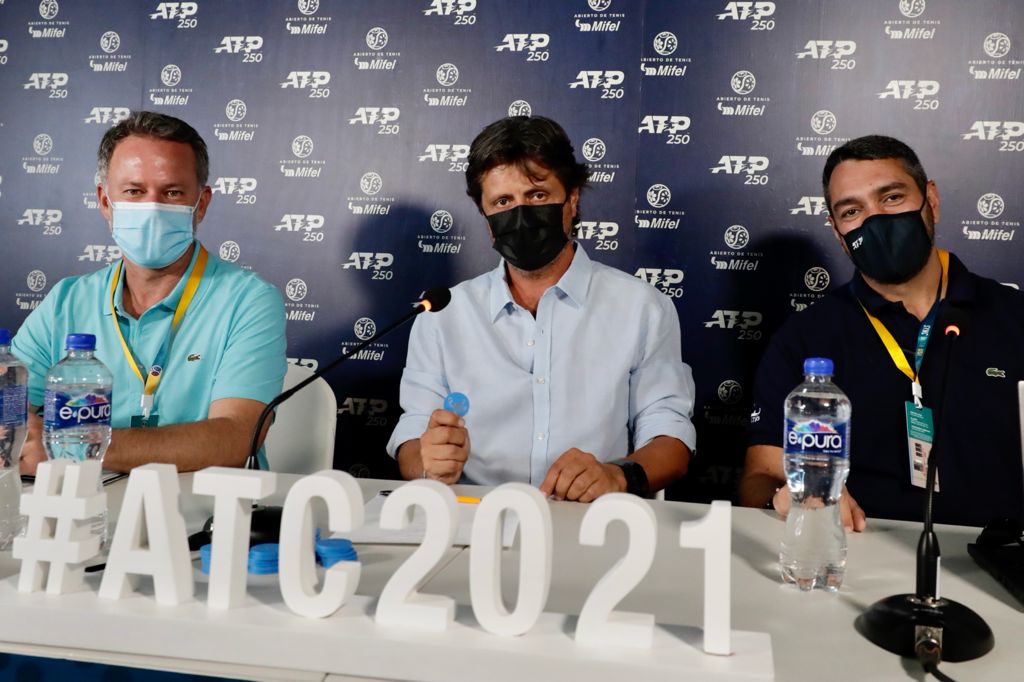 It’s time to get excited. The Main Draw of the Abierto de Tenis Mifel 2021 is ready and, this Monday, the activity will begin with high-level matches to premiere the new venue in Cabo Sports Complex (CSC).

This Saturday, the Main Draw ceremony began and was led by the tournament’s director, José Antonio Fernández, the Supervisor of the Association of Professional Tennis (ATP), Ali Nili and the ATP Tour Manager, Pablo Juárez, who started the tournament that will be held in Los Cabos from July 19th to 24th.

“It is a pleasure for us to be able to host this edition, it has been long months and years of work after suspending the 2020 edition, but we are happy and excited to debut in our new home. Three tournaments (Umag, Gstaad and the Olympic Games) are played this week, and yet the tournament is looking very good, so we are very grateful to all the people and authorities who have been able to do this,” Fernández said.

The fifth edition consists of a 28 players draw, in the singles category with the British Cameron Norrie (1) and the Americans John Isner (2), Taylor Fritz (3) and Sam Querrey (4) as the first seeds, which guarantees their debut starting in the Second Round. The remaining four seeds are the Australian Jordan Thompson (5), the American Steve Johnson (6), the Italian Andreas Seppi (7) and the American Mackenzie McDonald (8).

“This year I want to mention that 30% of the draw comes from the United States with players who are going through good times in their careers, for example, Cameron Norrie. Today we begin with the qualification in order to know the four player that will enter the main draw,” explained the executive.

The Organization Committee announced that the three Wild Cards were awarded to outstanding players on the circuit, for example the first champion of the Abierto de Tenis Mifel the Croatian Ivo Karlovic, who will debut against Jordan Thompson (AUS); the 2017 singles finalist and 2018 doubles finalist, the Australian Thanasi Kokkinakis, will play against Denis Kudla (USA), as well as Gerardo Lopez (MEX), who arrives today, as the best Mexican racket, on the eve of his debut against Steve Johnson (USA).

The draw ended with outstanding matches for the First Round, as the one between the Austrians Jurij Rodionov and Sebastian Ofner; the American duel of two young talents: Brandon Nakashima and J.J Wolf; as well as the experienced Andreas Seppi (ITA) and Alex Bolt (AUS).

In addition, the Swede Elias Ymer, the Ecuadorian Emilio Gómez, the American Mackenzie McDonald and the Japanese Yasutaka Uchiyama (JPN) will wait for their respective rivals coming from the Qualy, which will be held between Saturday and Sunday.

Meanwhile, the ATP Supervisor, Ali Nili, highlighted the impact that the Cabo Sports Complex (CBS) will have on the professional circuit from its premiere this year.

“It’s amazing, Los Cabos is one of the tour’s favorite destinations, the new facilities are amazing, so thinking about this in the future it will be surely have an excellent result. It’s a pleasure to be here,” he said.

Since the event was cancelled in 2020 due to the pandemic, the tournament returns stronger for the premiere of its new home. The Abierto de Tenis Mifel 2021 seeks a champion.