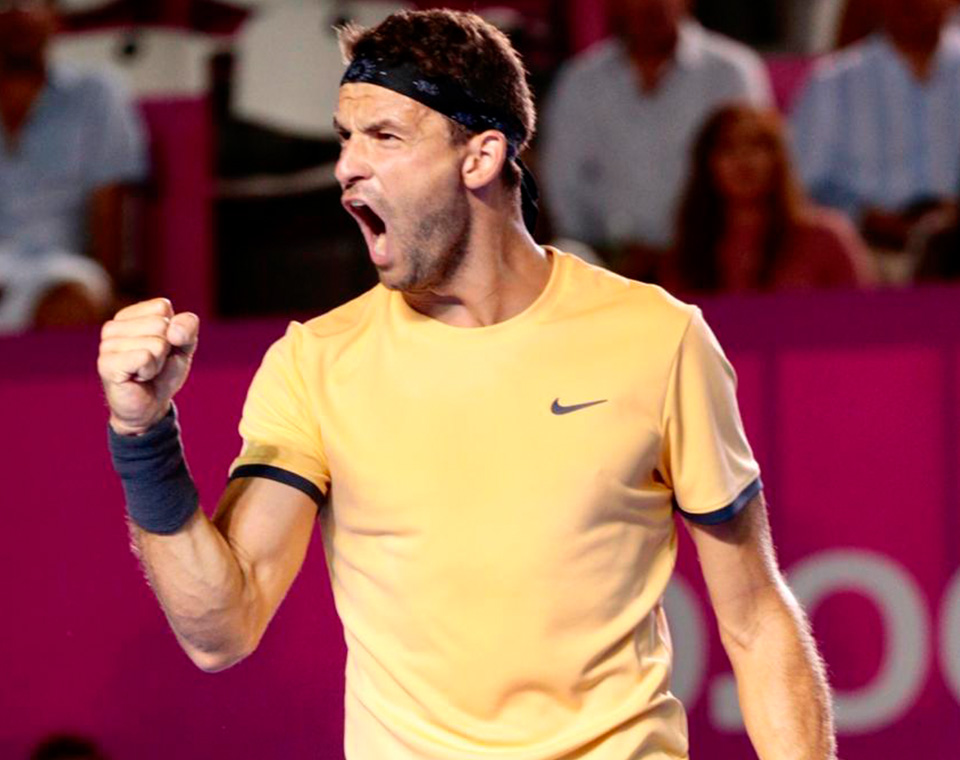 Dimitrov brings the heat at the 2019 ATC

Los Cabos, BCS, July 30, 2019.- Grigor Dimitrov returned to his winning ways with a spectacular victory over the American Steve Johnson in the first round of the Los Cabos Open.

The Bulgarian, who had the majority of the Mexican fans on his side, survived after quickly going down 2-5 in the first set. After winning the first set and going up 5-2 in the second, the Bulgarian lost control of his lead, hit way too many unforced errors, allowing the American to come back into the match. The third-set was full of drama and emotions as it got sent to a third set tiebreaker; Dimitrov won the match 7-6(4) 4-6, 7-6(5) in two hours and twenty-eight minutes.

“I think that from the first point, on even the first game, I though it was going to be one of those matches where I knew I was going to be okay. I knew I had to be ready for everything. Pretty good first set for me. Then, in the second set I had my chances. He started servicing better, it was just harder to return well. Then in the third set he played a good game to break me serving, the tiebreak was super tight, but I ended on a good note so I’m pretty pleased,” said the Bulgarian.

He added that his relationship with the Mexican fans is a very important one. “I would like to think that I have a good relationship with Mexican fans. When I first played in Acapulco it was pretty amazing. I think the crowd really appreciates the competitive nature of the sport as well so that makes it easier to play. So yes, coming into the court, it was really special for me. I really appreciated it because it has not been a good start of the year for me.”

The Bulgarian, No. 57 in the world, just broke a four match losing streak. He will now face the second seed in the draw, the Argentine Guido Pella in the round of 16 this Wednesday.  Pella won their most recent match-up at the 2017 Masters 1000 in Miami.

In other matches, the British Cameron Norrie, recent semi-finalist in Atlanta, began his Los Cabos campaign with a straight set 7-6(4) 6-0 victory over the Frenchman Gregoire Barrere to advance to the next round.

Norrie, semifinalist at this year’s Abierto Mexicano de Acapulco, will now meet Mikhail Kukuskin of Kazakhstan in the Round of 16.

In the last match of the day, that concluded at midnight, the American and fifth seed, Taylor Fritz, ended the German qualifiers Dominik Koepfer’s dream run. The match lasted just one hour to finish with a score of 6-3 6-4. Fritz arrives in Los Cabos as a finalist in last week’s ATP in Atlanta; next, he will face the Indian Prajnesh Gunneswaran.